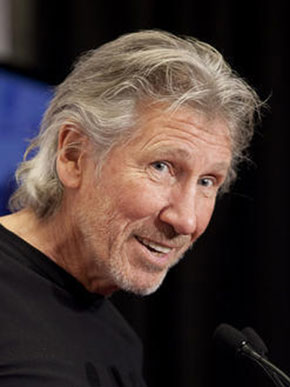 There has been some comment on the Internet about the Wall Show in Belgium to which I feel I should respond.

One Alon Onfus Asif, an Israeli living in Belgium, came to The Wall show in Belgium last week and being an observant sort of chap Alon noticed a Star of David on the Pig that is destroyed by the audience at the end of the show. Then Alon dutifully videoed our Pig on his phone, posted this video, and alerted Israeli Daily, Yediot Ahronot. This story was duly picked up by the ever watchful Rabbi Abraham Cooper, Dean of the Simon Wiesenthal Center and the entirely predictable resulting rant is attached here:

Often I can ignore these attacks but Rabbi Cooper?s accusations, are so wild and bigoted they demand a response.

I hold your outburst to be inflammatory and un-helpful and would suggest it can only impede progress towards peace and understanding between people. It is also extremely insulting to me personally in that you accuse me of being ?Anti Semitic?, ?A Jew Hater? and ?Nazi Sympathizer?.

I have three specific points to make:

1). Your use of the adjective ?ANTI-SEMITIC?.

First I direct you to an announcement by ?The Anti Defamation League? an American organization, who?s declared aim is to defend Jewish people and Judaism from attack. They recently said.

?While we wish that Mr. Waters would have avoided using the Star of David, we believe there is no anti-Semitic intent here.?

I should point out that in the show, I also use the Crucifix, the Crescent and Star, the Hammer and Sickle, the Shell Oil Logo and The McDonald?s Sign, a Dollar Sign and a Mercedes sign.

2). JEW-HATING? I have many very close Jewish friends, one of whom, interestingly enough, is the nephew of the late Simon Wiesenthal. I am proud of that association; Simon Wiesenthal was a great man. Also I have two grandsons who, I love more than life itself, their Mother, my daughter in law, is Jewish and so, in consequence, I?m told, are they.

3). NAZI? Not only did my father, 2nd Lieutenant Eric Fletcher Waters, die in Italy on February 18th 1944 fighting the Nazis, but I was brought up in post war England where I received the most thorough education on the subject of Nazism and where I was spared no horrific detail of the heinous crimes committed in the name of that most foul ideology. I remember my mother?s friends Claudette and Maria, I remember their tattoos, they where survivors, two of the lucky ones.

I for my part, as best I can, have continued along my parent?s path. At the age of nearly 70, in the spirit of my Father and Mother and all they did, I have stood my ground, as best I can, in defense of Mistress Liberty.

I have often come under attack by the pro Israel lobby because of my support for BDS, (Boycott, Divestment and Sanctions) which I won’t go into here, anyone interested can access a speech I made at The United Nations on the 29th November last year.

However I will say this, in a functioning theocracy it is almost inevitable that the symbol of the religion becomes confused with the symbol of the state, in this case the State of Israel, a state that operates Apartheid both within its own borders and also in the territories it has occupied and colonized since 1967.

Like it or not, the Star of David represents Israel and its policies and is legitimately subject to any and all forms of non violent protest. To peacefully protest against Israel?s racist domestic and foreign policies is NOT ANTI-SEMITIC. Your contention that because I criticize the Policies of the Israeli government I should be lumped in with the Muslim Brotherhood is risible, and again a personal affront. I have spent my whole adult life advocating separation of church and state.

At every Wall Show I invite 20 vets from whatever country we are in backstage at half time to meet, exchange handshakes and good wishes and mementos. At one show, a year or so ago, an older vet, Vietnam era, at a guess, blocked my exit, he put out his hand which I took, he did not let go, he looked me in the eyes and he said ” Your Father would be proud of you.”

The Wall is reaching out to you and all the other Rabbi Cooper?s out there.

Come to the show!

For the sake of some perspective. The inflatable pig that so offended young Alon has appeared at every Wall Show since September 2010, some 193 shows, yours is the first complaint. Also the pig in question represents evil, and more specifically the evil of errant government. We make a gift of this symbol of repression to the audience at the end of every show and the people always do the right thing. They destroy it.