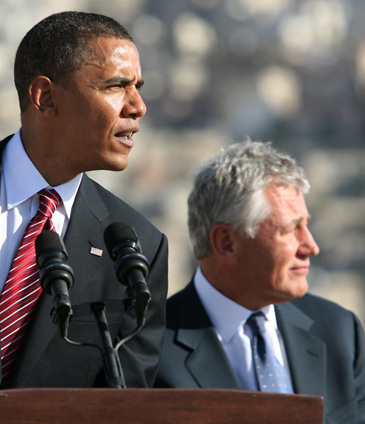 Critics said Chuck Hagel, a decorated Vietnam veteran, had failed to support Israel in the US Senate, had voted against sanctions on Iran and seized on his use of the phrase “Jewish lobby” in a 2008 interview.

Barack Obama has not formally nominated Mr Hagel to take over at the Pentagon but he is understood to be a front-runner and the White House is carefully gauging the level of opposition before making an announcement.

The 66-year-old struck a more sceptical note on Israel than most Republicans during his two terms in the Senate and refused to support the Israeli invasion of Lebanon in 2006.

Mr Hagel voted against some sanctions on Iran and was one of a handful of senators who did not join an effort to pressure the EU into designating Hizbollah as a terrorist organisation.

In a 2008 interview about the strength of pro-Israel groups in US politics, he said: “The Jewish lobby intimidates a lot of people up here”.

Abraham Fox, the national director of the Anti-defamation League, said the comments “border on anti-Semitism” and urged Mr Obama not to tap him for the defence post.

“His record relating to Israel and the US-Israel relationship is, at best, disturbing, and at worst, very troubling,” Mr Fox told the Washington Post.

The more conservative Republican Jewish Coalition said that his appointment would be a “slap in the face for every American who is concerned about the safety of Israel”.

Mr Hagel would be expected to clear a Senate vote on his nomination but the pre-emptive criticism may be enough to dissuade the White House from selecting him.

Mr Hagel could not be reached for comment through the Atlantic Council, the foreign policy think tank he chairs.